I moved to Carson City for the highest-profile job of my career. Less than 18 months later, I&#39;d sunk to the lowest depths of my life -- isolated, unemployed and perilously addicted to alcohol. F.I.S.H. fed me when I otherwise would have starved. It gave me a doctor checkup when I otherwise would have been in the dark about my increasingly failing health. It provided me temporary shelter from an abuser. Most important, it provided a sense of hope. During my darkest days, I saw smiling people helping others and treating them kindly. I really needed to see good in the world after experiencing horror, and F.I.S.H. showed it to me. Helping people through misfortune is one of the most inarguably moral things one can do in this world. F.I.S.H. does it exceptionally well, and as a result, I&#39;m a financial donor now and not a statistic. Because of my experience, I know that the money I send F.I.S.H. isn&#39;t wasted. It&#39;s used in the best way money can be used. It has been eight years since I so desperately needed F.I.S.H.&#39;s help, and I&#39;ve since recovered from my disease, resumed my career, and reassured hundreds of people experiencing difficulty that better times are ahead. Thanks to F.I.S.H., I&#39;m around to deliver that message and know it&#39;s true. Brian Sandford

My name is JD Powers; I am a person in long-term recovery from a substance use disorder. That means I haven’t taken a drug or a drink or gambled in over four years. I began drinking at the age of 14 and used meth for the first time at age 17. From that time forward, I continued on that dangerous and destructive path throughout my life. I became a liar, a cheat, and a thief.  My first arrest was when I was 19. My last arrest was at 47. The 28 years in between were filled with jails, prisons, and institutions. I’ve completed 12 inpatient programs, two mental health courts, two drug courts, many days in jail, and three prison sentences. From 1990 -2018 I was either drunk and loaded or in jail or treatment trying to get it together. There were many times I almost died from my addiction. The worst happened in 2014. I developed a heart infection that summer. There was an abscess in my heart valve that burst, causing sepsis. This was a direct result of I.V. drug use. I was on life support and in a coma for two and a half weeks under the assumed name I gave them because I was on the run from probation. After I woke up from this coma, I was in the hospital for another month and had to go to a nursing home and learn how to walk for another month and a half. During this ordeal, I had many people who just loved me back to health: my husband, my kids, my family, and the very few friends I had left. I didn’t know this then, but I’ve come to understand that even though I had all the love and support in the world, if I didn’t feel worthy or valuable, I would never think I deserved recovery or anything good. After the sepsis, I hated myself more than ever. So, by the spring of 2015, I was drinking and using again. I had left my husband and young son to begin a relationship with a man that I could use with freely. He turned into an abusive, violent man who had no problem physically, emotionally, and mentally beating me down. He was the physical embodiment of my self-loathing. He treated me exactly the way I felt about myself: ugly, worthless, hopeless, demeaned, and degraded. I existed under the threat of physical or verbal assaults for the next three years. I walked around this town with both eyes black and blue more times than I could count. I was at my lowest. In 2018 we committed a crime together and got arrested. I wanted so badly to prove my worth to him; maybe he would finally be good to me, so I took all the blame and pleaded guilty to a burglary charge. While awaiting my fate, we continued to use, and he continued to beat me up and emotionally torment me. Finally, in August 2018, I went to sentencing, the Judge looked at me, and I believe he saw how bad it was for me and sent me to prison. He honestly saved my life.  I was given a 16–72-month prison sentence. While there, I did a lot of praying and completed an 18-month drug and alcohol program that changed my entire life. About halfway through the drug and alcohol program in prison, I decided I had way more value than I ever gave myself credit for and finally cut all ties with my abuser and left behind any remnants of that life. I was released on parole on Dec. 6, 2019, and reunited with my first husband, who never gave up on me. We both decided to start over from that day forward. I don’t know where I’d be without him. I’m sure I’d be dead (by my hand or someone else’s). We quickly moved into a home of our own, then COVID hit, and I was unemployed and still on parole. I found a job at Food Maxx for 3 or 4 months. Then a friend told me about a job opening as a receptionist at FISH. Much to my surprise, I got the job. I was initially nervous, but my FISH family was so supportive and helpful. I absolutely loved, loved working there. It was super rewarding and kept helping me move forward on my recovery path. As the Receptionist, I realized I needed to learn more about Microsoft, typing, and general office skills. So, FISH paid for me to attend the Microsoft Office Assistant course at The Dream Center. They let me come in late to work to get this training and paid me my regular hourly wage. FISH paid me to learn. I got all Microsoft savvy, and it’s fantastic because I can use those skills in many different places. Working at FISH was the start of my career path in Human Services. I always knew I wanted to help people, but I didn’t know where or how to get into that field before going to school. FISH gave me my chance. They helped me grow personally and professionally. My job there was a springboard for where I am now as a Certified Peer Support Specialist and full-time Program Coach for Capital City C.I.R.C.L.E.S. Initiative. FISH has helped me move from minimum wage to a meaningful career. Thank you with all my heart Sincerely, JD Powers
Ways To Give 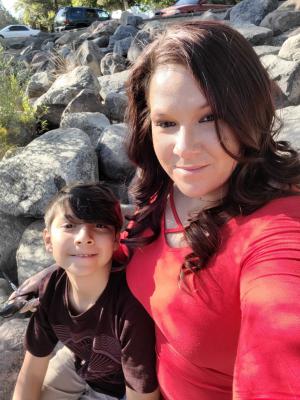 I have always been hesitant about telling my story, how it will sound, etc. All the stuff that runs through a recovering and insecure addict’s mind. Well, here goes nothing… In 2016, I got my last DUI in Colorado. I decided to leave there and move back to Nevada to change my son’s and my life once again. I was on the run for about three months or so. My parents took care of my son as I hit the streets hard. I kept using meth and couldn’t find my way back until I was stranded in Vegas. We had rolled the truck on the freeway going about 50mph. The driver almost lost their arm, and all I had was a minor scratch on my knee. I knew that was a sign from God that life is too short; get it together. We were finally able to get a ride back to Carson City. We went through the craziest storm I could imagine. Lightning was hitting the ground right next to the car, the brightest thing ever. I knew at that moment God was trying to talk to me. I prayed to God to just get me home, and I will find a rehab and get my baby and be the mom you intended me to be. We made it back to Carson City. I made some phone calls and asked my mom to drop me off to detox at WellCare in Reno, then was transported to the Reno-Sparks Gospel Mission. That’s where I met Tammy Treadwell, otherwise known as “Mama.” She helped me not only learn a whole new way of life, but she led me to Christ. I did the program for a year and came out a whole new person. Once I graduated, I became a house manager for a recovery program that ended up unsuccessful, but that’s okay because that was when FISH came in and turned my adventure of life into something incredible. In 2018, Jim Peckham took a chance and hired me as FISH’s receptionist. Two months later, another chance was taken on me, and FISH approved me to live in their Transitional Housing while being employed. I was lucky and was not going to let them down! I worked for FISH for two years, then went on to Panasonic. Working at Panasonic allowed me to save a little extra money for a deposit on an apartment. I was in Transitional Housing for three years as they let me stay one additional year to help build me up. We have moved out and can now afford a “normal” rent bill. FISH is generous and amazing at what they do. I always enjoyed working there too. A Hand Up, Not a Hand Out… I would say I’m the one that received a hand-up, not a handout. I am blessed and thankful to say I love my FISH family. I’ve had custody of my son since I graduated from the program. Our relationship has grown so much as well. July 28th, 2022, will be six years clean off meth. Thank you to all that had a part in my recovery!